'How I passed the FRCR 2B exam' with Shailender Singh 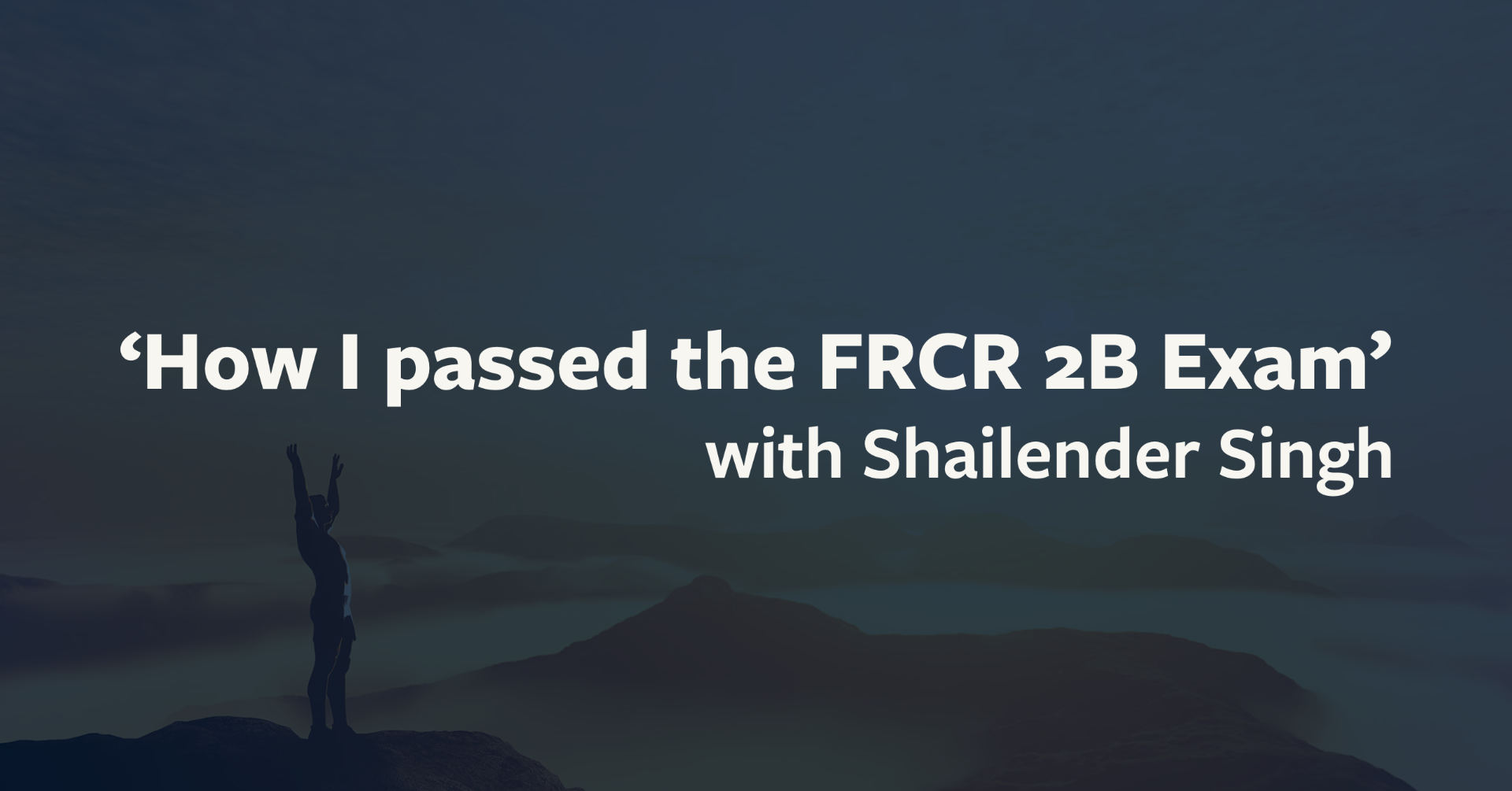 This article is the first part an edited transcript of a call with Dr. Shailender Singh during which he told the Revise Radiology Team how he passed his FRCR 2B Examination. It has been reproduced here with Dr. Singh's permission.

The second part will be published soon.

The Journey to FRCR 2B

My name is Dr. Shailender Singh. I'm a Radiologist who works presently in UAE Dubai and I've been here for almost seven years.

I was on the wait-list for the 2B and I was waiting to get my seat. In that time the COVID crisis started and exams were indefinitely postponed. Some exams were scheduled and canceled and some didn't happen at all.

So even though I was preparing for 2B, I was not sure whether I was on the right track or if I was doing my revision right. I was a bit lost at the time and I was not sure how to analyze my efforts.

That's when some of my friends - my juniors - passed the 2B sitting in the UK for the Indian candidates.

So one of my friends gave me the reference of Revise Radiology. Until then, I was not really aware of the Revise Radiology website. I went through the website and decided I should give it a try. That's when I got in touch with Dr. Jacob.

Dr. Jacob was kind enough to have a phone call with me and he spoke to me for almost 15 minutes. He took my background and he told me what to expect with the site and how we can go about the preparation. So that's how I got introduced to the website.

Initially, I took the All-Inclusive Plan as a subscription. That was I think in the year 2020. I was doing the Rapid Reporting and the Long Cases packets and also attending the monthly webinars. Initially, I was quite prompt but as I continued preparing, I was not sure about the Exam dates.

Every time I felt like, 'maybe this sitting I will get the seat' but the exams were once again canceled.

A Renewed Commitment to the Journey

I had reached a certain level of confidence but, again, I lost track and I discontinued the subscription. That was a little bit of a setback for me.

I contacted Dr. Jacob again and I told him I would like to renew my subscription. And that's when Dr. Jacob said, 'Okay, we have a customised offer for you where we will give you All-Inclusive for the next six months and you can use all of our resources, including the South West FRCR course and the monthly vivas.'

During this time, I also found the Long Case and Rapid Reporting discussions by Dr. Ahmed Elhagar and Dr. Mohamed Shanah.

I told myself that if I have to do this, I should do it properly. Like, I can't do it half-heartedly.

Getting Back to Revision

Starting from then on, I tried my best to attend the monthly vivas. I made sure I was available on that day and I was practicing regularly.

I tried to do each Rapid Reporting packet in the exam setting. In the Long Cases, I tried to do it in an Exam type of environment.

September is when I started preparing. So I was aiming for March. I knew I cannot take the exam before that. I knew I had a good six months' time on my hands and I started doing this regularly.

Initially I used to get a little bit off-track. Around two months later, I knew what I can expect in the exam and especially during the monthly vivas. Initially, I was unable to challenge my thoughts. I thought all over the place. I was not able to come to the final diagnosis.

Gaining Confidence in the Vivas

With feedback, I improved a little.

I started talking at a good pace, not very slow, not very fast, at a good pace where the examiner is able to receive what I'm speaking and also so I have enough time to think and see the case simultaneously.

I started building the habit of seeing and speaking at the same time. So over a period of two, three months I got a grip on the vivas. I knew I was doing fairly okay because most of the examiners said, 'okay, you are doing a good job.' So I got a little bit of confidence.

I was not sure what was my problem. Am I over diagnosing? Am I under-calling? I knew I should work more on the Rapids.

That's when I started doing at least two packets every day. I kept one packet to do along with the longs kit like an exam and another packet to do later.

During my practice, I started to realize that it's not how many cases I do, it is to do each case the same way every time.

This is the end of the first part of the article. The second part will be published soon!