'How I passed the FRCR 2B exam' with Nada Rashid 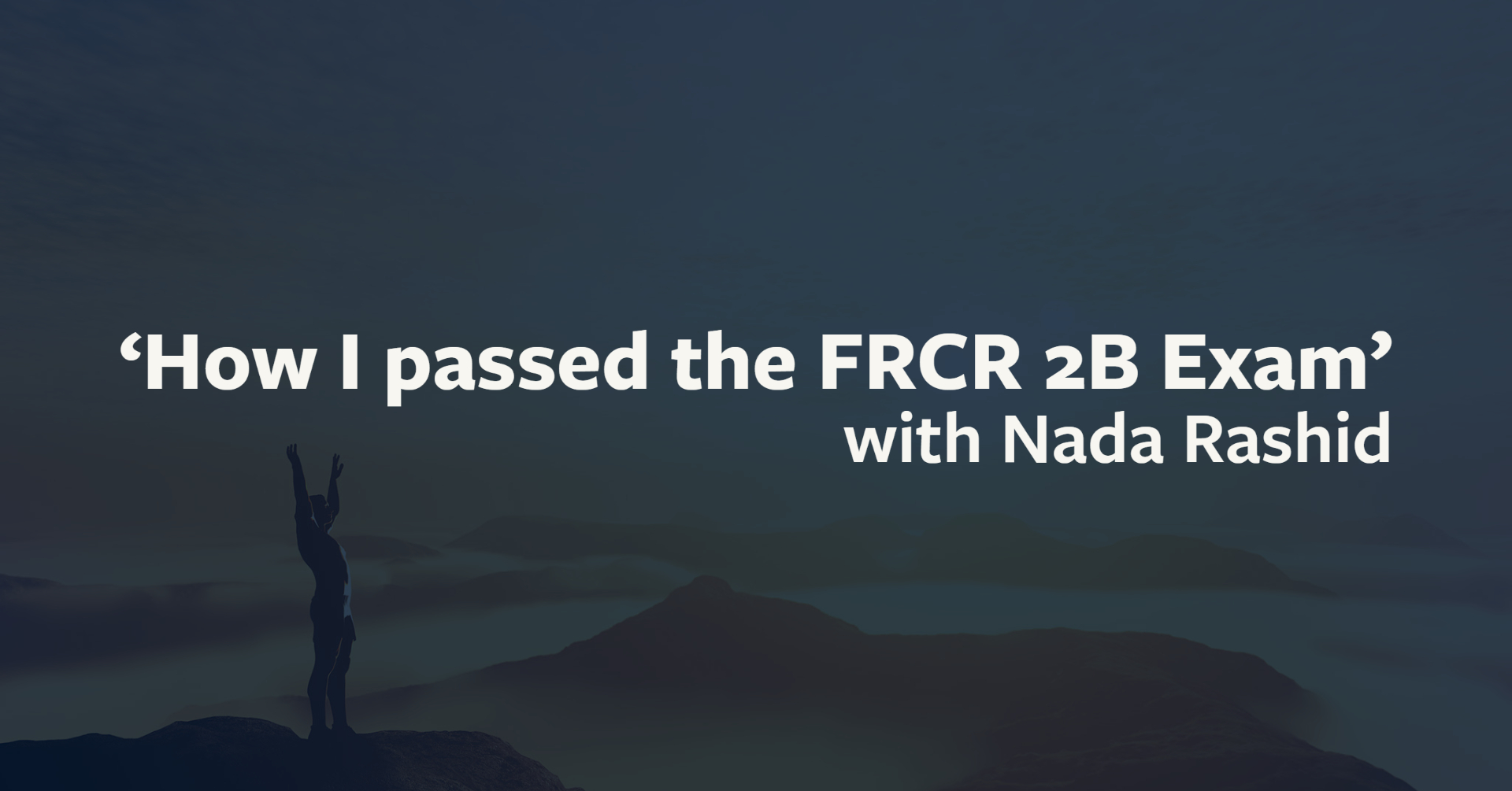 This is an edited transcript of an interview with Dr. Nada Rashid, a Radiologist who passed the FRCR 2B Exam with Revise Radiology, on her first attempt with 3 months of preparation. If you're losing sleep thinking about your FRCR 2B Exam in 3 months - this is for you

When should I sit my 2B Exam after my 2A Exam?

I was doing my senior residency when I started my prep for the FRCR 2B exam. I had just finished my 2A in November and I was skeptical about whether I should take a slot for 2B in March.

I had no idea about the pattern of the exam. After I got acquainted with the pattern, I asked my seniors for tips and how to prepare. The first thing everyone recommended was Revise Radiology, and then they also recommended some other courses.

I compared my options and contacted Dr. Koshy Jacob. He was kind enough to call me back, for which I was really thankful. He was the one who really gave me the confidence that 3 months was okay, for a person like me, who's pretty free at work, to sit the Exam. That's what gave me the courage to just step in and take the slot and go ahead with it. That's how I made it.

The obstacles in sitting the Exam in 3 months

In between, I got very low. It was a little difficult for me to cover all the packets in three months. I didn't know whether this was going to happen. Some people say the exam is too difficult and you get a bunch of opinions from all sides. Finally, I just practiced with Revise Radiology and attended a couple of viva courses along with it.

Revise Radiology was an excellent option. Taking a subscription was the best decision I made, because the rapids are just the same. The site arrangement is the same as Practique and the long cases are similar to the Exam. The level of the cases in the exam was not more difficult or easy than the Revise Radiology cases.

For the viva courses and the whole written part, it was just Revise Radiology and nothing else. I haven't even gone through the recommended books because the images were pretty difficult to comprehend. So finally I made it, thanks to Revise Radiology and especially Dr. Koshy Jacob. He was the one who really said that 100 days is enough for this.

I was really scared, to be honest, I didn’t know if my attempt would go wrong. Even after the exam, I had a few questions about whether I’d be fine, whether I’d made it or not, especially after the viva.

How I used the 3 months before the Exam

I'd been preparing every day because I'm the kind of person who sticks to timetables. I was doing my senior residency, and I was alone with my kid and husband, so I used to get around 6 hours a day because they were very cooperative. I was working till February, so during those times it was a bit difficult for me.

I used to make sure that I went through two Rapid packets every day. Practicing the longs was something that was just very difficult for me.

I started the monthly vivas, and that was when I got in touch with other people who were sitting the Exam as well. That's when I came to know that it was not necessary to be all that elaborate in the Longs. In the early stages, I was scared that we had to write all this in just 75 minutes. It was towards the end that I gave more time for the Longs. In March I had all this time free because I got off my senior residency and took a break from work. I spent 6 to 8 hours every day, and by the end, I was doing almost four to five rapid packets a day.

I spent 6 to 8 hours every day, and by the end, I was doing almost four to five rapid packets a day. I also attended all the Revise Radiology monthly vivas.

I also attended all the Revise Radiology monthly vivas. I used to make sure I got a hot seat during the vivas and on the Southwest FRCR course too. In the beginning I used to type and practise the longs, but towards the end I found it a bit overwhelming. So, I stopped typing and I just started going through the cases and explanations. I don't know if it's a very good option because I scored only six but some of my colleagues who practiced typing have scored seven and eight. Actually, that's where I went behind. I was a bit lazy, to be honest. I would advise typing and practicing to those who have time.

The monthly vivas and the Southwest FRCR vivas helped me a lot, just to understand how the exam is. It was almost a replica of the exam. Some examiners had a few difficult cases, but the rest were typical. A few of the cases at one station were pretty bad for me, but I still scored 6.5 over there. The preparation wasn't that hectic and it was fun as well.

The monthly vivas and the Southwest FRCR vivas helped me a lot, just to understand how the exam is. It was almost a replica of the exam.

I became a better radiologist through the process. Apart from preparation for the FRCR, I’ve been able to interact with many people, many consultants from all over. And that is really another experience. It's not just us and our department. And then you go for the exam. It's not just a confined pool. We could see all sorts of consultants from all countries, and candidates, too. We could watch others so we know where we stand and where we should improve, where we should become better and where we stand out. Also, we get to know our strengths and weaknesses. So that was a really nice experience.

What resources do you recommend for those sitting the Exam soon?

I would recommend Revise Radiology to those sitting the exam soon because this is an overall package. If you have the whole package, it's worth the price you pay. The first monthly viva is like an eye opener. The second one just gives a bit of tuning in. And then from the third one, you know how to go through it. Sometimes it's really disheartening when you get absurd cases, but still, that helps us improve.