'How I Passed the FRCR 2B exam' with Deepa S 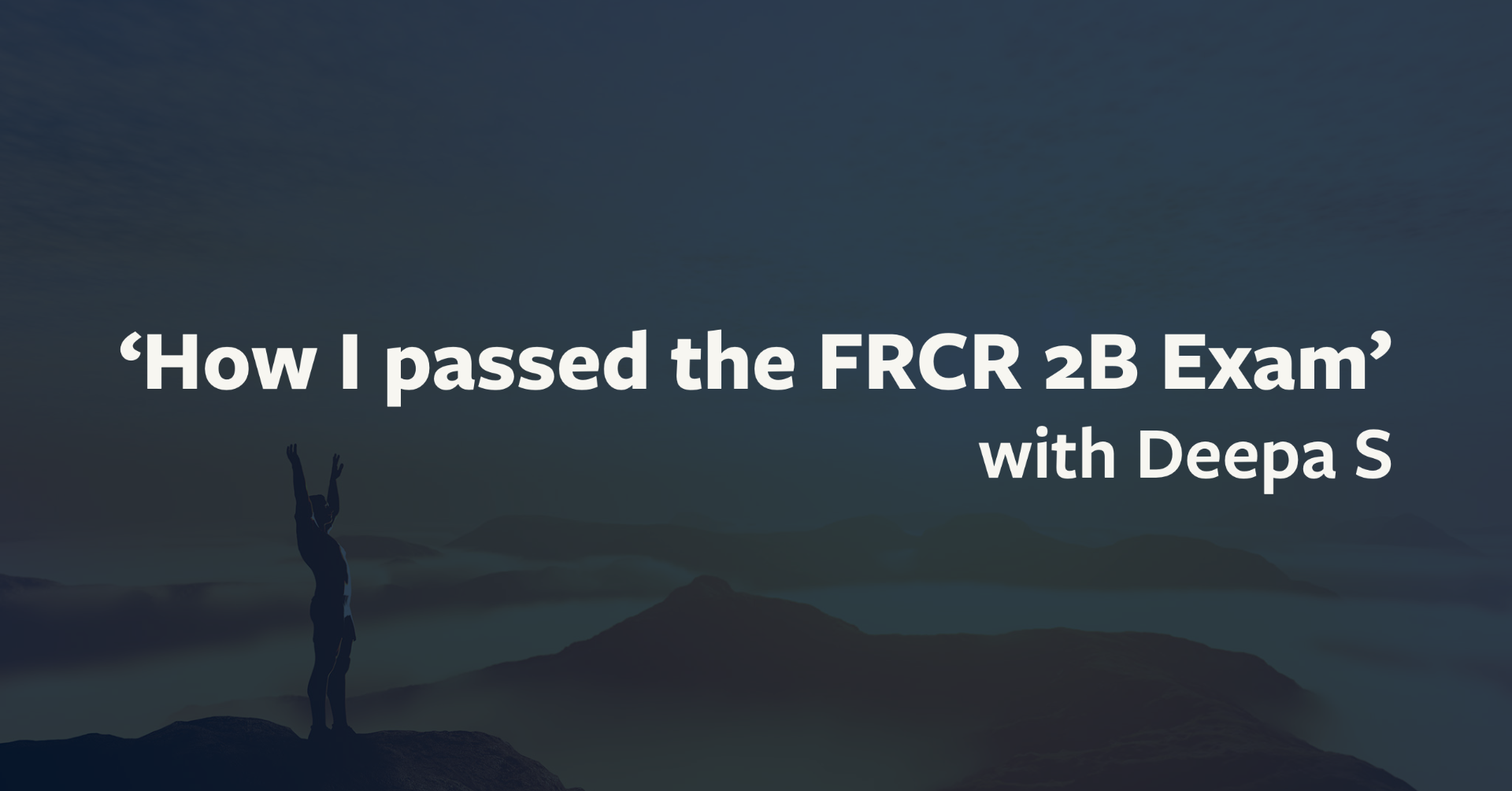 This is an edited transcript of an interview with Dr. Deepa S, a Radiologist who passed the FRCR 2B Exam with Revise Radiology, on her first attempt after being set back almost half a year due to Covid.

My name is Deepa and I’m an assistant professor in Radiodiagnostic Medical College, in Kerala. I'm a working mother with two kids.

I started my FRCR Exam preparation in March 2021, when the FRCR was launched in Hyderabad. I didn't get a seat for that session. So, I began preparing for the June 2021 exam in March. That's when I realised that the exam was postponed. I wasn't able to study properly after that. The exam was rescheduled to November 2021. I started preparing for the November exam but I didn’t get the slot then either.

When I attended a viva course in Hyderabad, I realised that I was doing okay with the vivas but I was behind in the written packets. I scored 19 or 23 in the rapids. I was a bit depressed. I needed to get at least 27 out of 30.

What happened was, I had restarted my preparation with an emphasis on the vivas, since everyone said the vivas are quite difficult. I practiced for the Rapid Reporting section with FRCR Scholar. I didn't practice longs at all.

How I revised for the FRCR 2B Exam

I felt like I wasn’t good enough at rapids, so in December I used to do a minimum of three rapids packets per day. By the end of December, I could complete almost all the Rapid packets. But my scores were not too good even then. After doing a lot of Revise Radiology packets, I saw my scores improving. I started to score more than 27 in most of the Rapids. So, I felt a bit more confident.

Next, I decided to try the long cases. I started practicing the long case packets by January and I did one or two packets per day. I saw a lot of cases and my typing started improving. I expected to study and do the packets much more than I did, but in the end of January, my father-in-law got sick, and so I could only revise the packets I had already done. By the end of February, I could see that I’d improved a lot, especially on the written packets. In March, I brushed up my Vivas.

After doing a lot of Revise Radiology packets, for about half a month, I could see that my scores were improving, I started to score more than 27 in most of the Rapids.

I also attended some South West FRCR 2B viva courses. The feedback I got was very helpful for me.

Approach to the written packets

During the breaks on the Viva courses, Revise Radiology had PowerPoint presentations on the approach to the FRCR 2B Exams. I learnt how to approach the Vivas, the Long cases, and so on.

I didn't miss anything in the rapids and I scored 30.

On the first day of the exam, when I was doing the written packets, I knew what to do when I saw a rapid - go through the entire set of cases at and find the abnormals. If it is obvious that it is abnormal, mark it as abnormal. After that go back to the cases again and try to zoom each and every case, each and every x-ray you are provided with.

The other point I find very important is not overcalling. I had a habit of overcalling, like many small lines as fractures. That improved with practice. After the rapids, I was very confident that I would pass the exam because it was easy for me, and then the long cases were almost similar to that. The FRCR exam platform is the same as the Revise Radiology platform.

Dr. Koshy Jacob also mentioned in his video that you should go through the entire long case packet and first see the cases with a small number of images, so I did that.

For one of the long cases, the findings were a bit difficult to pick up. In the viva sessions, I learnt that you should not go very deep into such cases initially because that actually reduces your time. So, I came to that long case packet late in the Exam. I spent nearly 20-25 minutes on that long case. I finished the rest of the long cases fast and then it was easy. After the small findings I went back to all the cases again and I added small findings on each of the observations.

The basic thing about both the written packets and vivas is the approach you take. Like in the rapids, everyone can see the findings. But in a short period of time, in an environment where there is a bit of stress, both practice and the proper approach are needed.

How I tackled the Vivas

I was very confident doing the Vivas because I had been preparing for a minimum of six to eight months. But in the real exam it's not as easy as you see in courses. It's a bit difficult because of the stress during the exam.

In the viva courses, I could complete the management part very quickly, but during the real exam, it was difficult for me. Once I got the diagnosis, I forgot the management part. It was only when they asked me what I would do next that I discussed the management. My suggestion is that if you can attend more viva courses, your FRCR 2B viva exam will be easier. Because when you attend courses, you put yourself in an environment very similar to that of the real exam - a stressed environment. Tackling the vivas, handling cases and management in a stressful situation - that actually helps a lot during the exam.

My suggestion is that if you can attend more number of viva courses, it will be easier. Because while attending courses you will be in an almost similar situation to that of the real exam - a stressed environment