'How I passed the FRCR 2B exam' with Sayan Sarkar 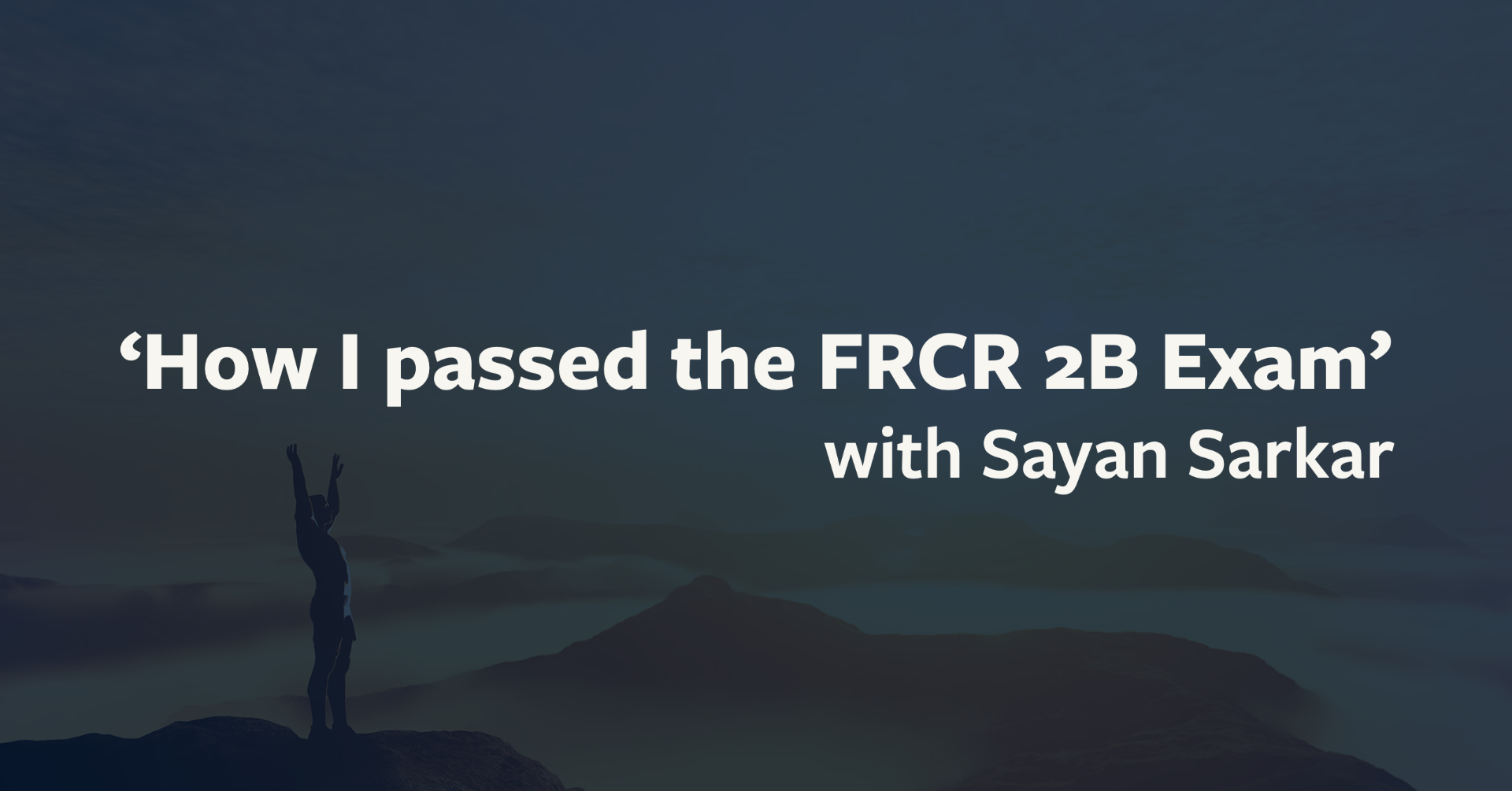 This is an edited transcript of a interview with Dr. Sayan Sarkar. He passed the FRCR 2B exam on his fourth attempt in 2022, and explains how he prepared for the exam.

The start of my FRCR Journey

I started with FRCR Part 1 way back in 2016, when I was in my first year of residency. I cleared physics first and then anatomy, both in 2017. Then in December 2018, I cleared the 2A exam, that was when I also completed my post graduation in India.

Up until the 2A exam it was quite smooth. I cleared all the exams in my first attempt.

The main challenge I faced was sitting the FRCR 2B. My first attempt at the 2B exam was in November 2019. I passed my post graduation in 2018, December, along with the FRCR 2A, and I sat the 2B exam in November 2019 in Hong Kong. I was unsuccessful at that attempt, and I realised that since I was quite new, my approach was probably not up to the mark, and so I took it in my stride. My performance in the rapids was not that good that time, the rapids were my main weakness. But my viva was still fine, so I sat the exam again in January 2020, which was held in UK.

I was unsuccessful yet again. This time my main issue was the Viva. I did quite badly in the Vivas and realised that I probably underestimated the importance of the Vivas and did not take it as seriously as it should have. My exposure to radiology was also not adequate. I was supposed to take another attempt in June 2020, but the exam got cancelled because of COVID. So there was a gap and I joined a fellowship programme in India, an Onco Imaging and Interventions in Tata Medical Centre.

That fellowship helped me a great deal because it gave me quite a bit of exposure, both in cross sections as well as in interventions, and it was a two year fellowship programme.

So in my second year of fellowship, that is in March 2021, I gave my third attempt in Hyderabad. Now, that was probably my best attempt up until that point. My rapids were better than before, although it was marginal. I got 5.5. My viva was definitely better. It probably had a lot to do with the fellowship exposure, I felt my Viva was quite good, but when I got the results, I was a half point short in the Vivas, as well as in the rapids, leaving me a total of 1 point short. So I failed my third attempt as well.

When it came to my 4th attempt, I had already finished my fellowship programme and started a job, I'm a consultant in a hospital. So I took up Revise Radiology for rapids and longs mainly. Apart from that, I joined a few courses like the Apollo FRCR course and I practiced vivas with some of my colleagues. I used to practise rapids before and well, but then I started practicing from more number of websites, and Revise Radiology is quite good with Rapids - especially the first 30 sets, as Dr Koshy keeps saying, the first 30 sets are really good.

The long cases in Revise Radiology are also excellent. I found them quite good. Then the real exam came and the rapids went much better, I got six in the rapids. My longs also went better, I got a seven for the first time. I got a five and a half and an 8 for the vivas. It took some time but I think the main thing is that you just have to keep on trying and eventually there will be a point of time where you pass the final part.

So whatever we practise in Revise Radiology, whatever tools we use like zoom, pan, windowing, etc. they are exact replica of the real exam. So you'll get more accustomed to the actual exam scenario. And you have the same benefit for the longs as well. That is probably one of the main plus points in the written subscription.